Story and Photos by Phil Castle, The Business Times of Western Colorado

Kathy Schmoldt has her own explanation as to why evaporative coolers are sometimes dubbed "swamp" coolers.

"The reason why they're called that is because of all the fungi, bacteria, mold, and other aquatic microorganisms that grow in them." Maybe not alligators and snakes, but other organisms Schmoldt said are potentially just as dangerous - bacteria and fungus.

The problem isn't the cooler itself, but the water inside that can become contaminated

When that happens, microorganisms get into the pads and are blown into the air people breathe at home and in the workplace. That can trigger everything from allergy attacks to headaches to serious respiratory diseases. 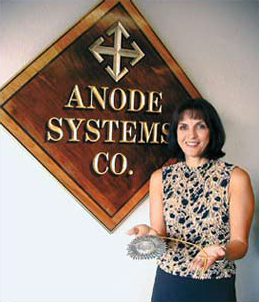 Schmoldt has a device that she believes will help people keep their cool and breathe easier - a zinc anode that not only curbs rusting in evaporative coolers, but also the growth of bacteria and fungus.

Sunflower Zinc Anodes are a product of Anode Systems Company, a Grand Junction business owned and operated by Hans and Kathy Schmoldt.

But Kathy Schmoldt, a retired school teacher who's now involved in marketing with the company, hopes to promote more awareness of the benefits of the Sunflower anodes - if for nothing else, the health of it. "If you don't have your health, you don't have a whole lot."

Hans Schmoldt founded Anode Systems in Grand Junction in 1984. First receiving a geology degree from the University of Missouri at Rolla, then returning to become a corrosion engineer, Schmoldt started the company following the oil shale bust in Western Colorado. He'd had previous experience in corrosion prevention with his father's business in Oklahoma.

Anodes work as part of a cathodic protection system. Anodes are attached with a wire to the object that is to be protected - an underground tank or pipeline, for example. That turns the object into a cathode and creates a kind of weak battery. As long as electrons flow from the anode to the cathode, corrosion is controlled. 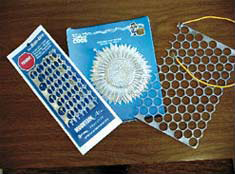 For most applications, Anode Systems uses large magnesium bars and tubes as anodes. Schmoldt developed the Sunflower Zinc Anodes when he was experimenting with zinc as an anode to control corrosion in evaporative coolers.

He discovered the zinc not only curbs rusting, but releases zinc oxide into the water. Zinc oxide is a natural antibiotic used in a variety of products to prevent diaper rash and athlete's foot and protect fruits and vegetables from mildew.

"All of a sudden, you realize you're fixing a whole lot of issues other than rust," Kathy Schmoldt said.

One of the first things they noticed was that the anodes eliminate the "fishy" odor that sometimes develops in coolers, an indication that organisms are growing in the water. "If you can smell it, you know it's bad," she said.

But other organisms that don't produce odor also may be present in the water. Anodes come in different designs.

The anodes, which come in several designs, not only curb rusting in coolers, but also bacteria and fungus that can contaminate water.

Last year, Anode Systems hired a microbiologist to collect water and filter samples from coolers and culture the samples to determine what species of bacteria and fungi were living there. Numerous species were detected, including some that cause diseases. While healthy people usually can ward off those diseases, young and elderly people and those with weakened immune systems can be overwhelmed by large concentrations of bacteria and fungi. This can cause allergic reactions, asthma attacks, headaches, nausea and even pneumonia.

While people sometimes attribute health problems to air pollution outdoors, it's indoor air pollution that could be the source, Schmoldt said. There are other ways to treat the water in coolers, including bleach, chemicals and changing the pads. But they're not as effective as zinc anodes, Schmoldt said.

Bleach and chemicals don't work for long and produce fumes of their own. While many people change cooler pads every year, bacteria quickly multiply. Within just hours, millions of bacteria can inhabit the pads. Magnesium anodes are available, but don't prevent the "fishy" smell, meaning organisms still are present in the water. Moreover, magnesium anodes must be replaced every year.

A zinc anode is inexpensive, and can last for several years depending on the water. The anode is simply laid in the water pan . A connecting wire is attached to the metal covering with a single screw. A special anode made of zinc and brass is available for coolers with plastic covering. With zinc anodes, evaporative coolers don't have to smell like a swamp, Schmoldt said. And so-called swamp coolers certainly don't have to serve as a wildlife habitat.

This article appeared in the July 4, 2001 issue of The Business Times of Western Colorado.